Robin Bullock’s music accents the connections between the Celtic and American traditional and acoustic music. That he is able to do so by playing almost any stringed instrument to perfection is his specialty.

Friday May 6, 2016 @2: Robin Bullock
Listen this afternoon for the next Friday @2 when guitarist and multi-instrumentalist Robin Bullock will be our guest, performing live in our studio.  Robin will play his third homecoming concert a the Black Mountain Center for the arts this weekend, and will give us a preview when he plays just for us on Friday @2

Friday Sept 2, 2015@2: Robin Bullock
Listen this Friday afternoon at 2 for another live performance from our studio as we welcome guitarist and multi-instrumentalist Robin Bullock. Robin has roots in Celtic music, but he has also released a recording of works by Bach and Dowland. He’ll share his music with us at 2 Friday afternoon. Please join us.

April 15, 2015 Friday @2: Robin Bullock
Listen Friday at 2 pm for another live performance from our studios when guitarist Robin Bullock  joins us to astonish us with his artistry. Robin performs a Homecoming Concert at Black Mountain Center for the Arts on Saturday evening while he’s home from an extended tour with Janis Ian and Tom Paxton. Friday @2 he’ll give us a preview of that concert and bring us up to date with his latest news, including a new recording.  The last time Robin visited he treated us with Bach on mandolin. 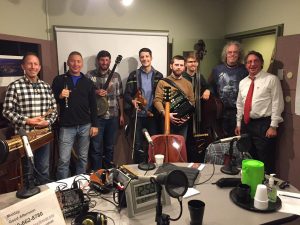 The Chimes – from Christmas Stories by Charles Dickens
Thursday, December 29, 2016 through Friday, January 6, 2017. Read by Jim Fleming.
The Chimes: A Goblin Story of Some Bells That Rang An Old Year Out and a New Year In.
(Serenity Publishers; ISBN: 1604505958)
With Robin Bullock (Dorian DOR 93250) Theme: “Tomorrow Shall Be My Dancing Day” & “Greensleeves” from “A Midnight Clear: A Celtic Christmas”