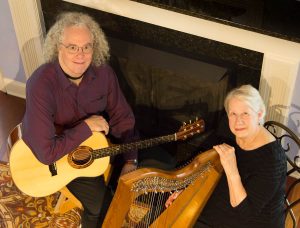 Sue Richards and Robin Bullock blend the ancient and magical tones of the Celtic harp with the powerful resonance of the steel-string guitar, cittern and mandolin, drawing on Irish, Scottish, Welsh and Breton traditions to create something truly unique: beautiful and timeless, yet fresh and current. Sue and Robin have been friends and colleagues for decades, having both recorded WAMMIE Award-winning solo albums for the Maryland-based Maggie’s Music label and collaborated on many other projects over the years; now both transplants to the western North Carolina mountains, they have joined forces in a long-overdue chamber-Celtic duo.
Four-time National Scottish Harp Champion Sue Richards has performed numerous times for the Embassy of Ireland in Washington, DC, as well as for President Bill Clinton (twice!) and Queen Elizabeth II. She has served as president of the Scottish Harp Society of America (SHSA) and the Washington DC Folk Harp Society, and is now a SHSA Distinguished Judge. She has appeared on A Prairie Home Companion, sat in with The Chieftains, performed in Scotland at Celtic Connections in Glasgow and at the Edinburgh International Harp Festival, recently toured Norway and Sweden with the Harpa ensemble, and can be heard on dozens of award-winning recordings. In addition to her solo work, Sue is a founding member of the Grammy-nominated Ensemble Galilei.
Robin Bullock has been hailed as a “Celtic guitar god” by Baltimore City Paper and “one of the best folk instrumentalists in the business” by Sing Out! Magazine. His honors include the Association for Independent Music’s prestigious INDIE Award, Player’s Choice and Album of the Year Awards from Acoustic Guitar Magazine, and the Swannanoa Gathering’s Master Music Maker Award. Robin balances his solo work with his longtime role as touring sideman with Grammy Award-winning folk icon Tom Paxton, and was the sole support musician on Tom’s 2010, 2012, 2014 and 2015 “Together at Last” tours with fellow Grammy winner Janis Ian. Writing about Robin in The NPR Curious Listener’s Guide to Celtic Music, Thistle and Shamrock host Fiona Ritchie says “Bullock’s music accents the connections between Celtic and American traditional and acoustic music. That he is able to do so by playing almost any stringed instrument to perfection is his specialty.”

This exciting and enchanting new duo is available for weddings and other private events in the greater Asheville/WNC region (and possibly beyond; we can discuss that too). For more information, drop a line via the Contact page here!